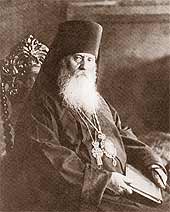 "In 1889, - recalled the father Kronid, - a very handsome young man, dark-haired, with burning black eyes, came for obedience to the Holy Trinity-St. Sergius Lavra, his name was Alexander Druzhinin. He was a Muscovite. I introduced him to the Father Superior, and the young man was affiliated with the brethren. He was given an obedience in the refectory; his task was to serve the pilgrims. Every day I saw him at the Trinity Cathedral at the brethren prayer service at two o'clock in the morning. From time to time, I asked him, "How are you? Do you get used to it?" He answered, sometimes with tears of tenderness, "I live like in paradise". In such cases I unintentionally thanked God for such organization of his soul.

Six months passed. Alexander Druzhinin was given a new obedience (to manage vegetable cellars) and he got a monastic cell, where he lived alone. Once I came to him and found my friend in some ecstasy. Apparently he performed an especial feat of prayer. Another few months passed. One day visiting him I asked a question, "My brother Alexander, do you attend all the services in the monastery?" He replied humbly, "All". "And brethren prayer rules too?" "Yes, - he said and added, - every day I attend all-night Vigil in the temple of Zosima and Savvaty and I stand at the early and the late Liturgy in the morning."

Then I said to him: "Tell me, who blessed you for such a feat of intensified prayer? Matins, Vespers and early Liturgy are the full range of church services, and the brethren prayer rules completes the duties of a monk. But later Liturgy and Vigil, representing the repetition of usual services, are not mandatory for all. I know that during the later Liturgy when anybody comes to you for provisions from the brethren kitchen, he doesn’t find you in your cell. Then the cooks have to look for you in the churches, what, undoubtedly, causes grumbling and hostility in their hearts. You should think, whether such a prayer will be useful for you. And I had no intention to offend your love with my speech.

I take the liberty to ask you about another thing. Many times I have come to you and I see that you accomplish a feat. Who have blessed you for it? Remember, brother Alexander, that acting according to one’s will is harmful to the soul of the person who lives in the monastery. Mind that a willful prayer may be a sin, a cause of pride and self-delusion. I pray and beg you, for God's sake, do not do any feats without the knowledge of your spiritual father." The young ascetic listened to me with visible displeasure. I went from his cell foreboding evil.

Another month passed. One day I was sitting in my cell and reading a book approximately at two o’clock in the afternoon. Suddenly the door of my cell opened with the noise and the brother Alexander Druzhinin solemnly entered with the loud singing of "It Is Truly Meet". He bowed down to earth before my cell icon and suddenly started to bow again. His eyes burned with some unkind, sinister fire, and he seemed to be extremely excited. Not having waited until the end of his bows, I stood up and said gently, addressing him: "Brother Alexander! I see that your soul is sick. Calm down, sit a little and tell me what you need. "

In response to my words he shouted with rage: "Worthless monk, how many years have you lived in a monastery and not acquired anything spiritual. Here, I have lived for one year, and I have been honored to have the great Divine gifts. Every day many Archangels arrive at my cell from the throne of God. They bring a seven-branched candlestick and sing hymns of indescribable glory with me. If you were worthy to hear ineffable singing it, you'd be dead, but as you are not worthy of it, I'll strangle you. "

Seeing his infernal, vicious excitement and knowing that all persons staying in delusion are physically very strong, I told him: "Brother Alexander, do not come to me. I assure you: I'll throw you out the window." I snatched a moment and knocked on the wall of my cell-neighbour, who immediately came to my aid. With the coming of the neighbour I began to speak more boldly to him, "Brother Alexander, you did not want to listen to me and now you see what hellish trouble have you got into. Think, you want to strangle me, but do the Saints do that? Make a sign of the cross and come to yourself." But Druzhinin continued threatening to strangle me as a useless monk and even told me: " So what! What a tutor came to me in my cell with such an advice - do not pray much, listen to your spiritual father. All of you are nothing to me."

Seeing such an inhuman pride, anger and uselessness of further conversation with him, I asked a neighbour to make him go out of my cell. The same day, after Vespers, the brother Alexander came to me again and triumphantly said that during this Vespers the Holy Spirit descended upon him. I smiled. Apparently, this offended him, and he told me: “What are you laughing at? Go and ask hieromonk Father Apollos, he saw this descent." In response I said, "I assure you, my dear, that nobody saw this descent, but only you yourself. I beg you, believe me, you're in self-deception. Be humble with the heart and soul, go and repent humbly."

But the sick man continued to abuse and threaten me. Hardly had I come from the early Liturgy on the other day, when the brother Alexander came to me again and said that now the Lord had honored him with a glorious vision in the church of St. Nikon. Light, being brighter than the lightning, shone from Jerusalem icon of the Mother of God, located above the Holy Doors, and all the people in the temple, seemed to have fallen down and withered like the mown grass. I asked him: "And why did not you become withered from this light?" "I am kept with the special grace of God for the sake of my feats, he answered, not everyone is worthy of it."

I said to him: "You see, brother Alexander, how the devil deceived you, having erected you into the dignity of a saint, and thus increased your pride. Believe me, those, who were standing in the church with you, are in spiritual health, and everything that you saw was a spiritual demonic delusion. Come to your senses, realize your mistake, repent tearfully, and God will have mercy on you." "I have no need to repent of anything, but you need to repent!" - he shouted.

Seeing such a tumult of the wretched person and being afraid of the fits of madness, I immediately wrote a letter to his friend Ivan Dimitrievich Molchanov, who recommended Druzhinin for admission to the Lavra. I described the condition of this sick man in the letter. Three days later, Molchanov came to me. I explained him everything about Druzhinin, and knowing that Molchanov is familiar with the Father Superior of Nicholas Peshnoshsky Monastery hegumen Macarius, I advised him to take the miserable man there immediately. The same day Druzhinin was sent to Peshnoshsky Monastery. When Ivan Dimitrievich told Father Hegumen about this sick man, he said quietly, " He will recover here by the grace of God. We had the same brethren”.

Alexander Druzhinin was given an obedience by the Hegumen - to clean the horse stalls in the stable yard. At first the brother Alexander protested, saying: "You appoint such a great ascetic to such a humiliating obedience. I must be in the church and perform spiritual feats for edification of others." The Father Hegumen said for the peace of his mind: "You are at your best in showing a good example of humility and meekness through the execution of the given obedience. And don’t worry about prayer. All the brethren will pray for you in the church."

And indeed all the brethren prayed hard for the sick man with the blessing of the Father Hegumen. Six months passed, and Alexander Druzhinin was in the church only on holidays and at the early Liturgy for all this time. He got so tired throwing dung for the whole day,  that he went to bed at night without daytime praying and slept like the dead. He didn’t have the time for the feats. The thought that he was a saint, grew weaker with each day, and visions gradually ceased.

For the whole year he was in obedience at the stables and has forgotten his imaginary feats. Then he was transferred to the bakery, where labor was not easy too. Two years later, Druzhinin was transferred to lighter obediences. Then a nice impress of humility emerged on his face. He served in Peshnoshsky monastery for seven years. Here he was made a monk with the name Athanasius. Later he moved to Moscow Simonov Monastery, where he was elevated to the rank of hierodeacon for the humble and good monastic life.

When I was in obedience in Petrograd, as a head of the Department of Trinity Monastery (“Fontannoye Podvorye”), the father Athanasius Druzhinin came to see me. I asked him whether he remembered what had happened to him in the Lavra at the time of his spiritual illness, and he replied: "I remember everything, but only now realize the full horror of my state of mind."