All Who Does Not Need to Repent Is in Delusion

Letters of Archbishop Theophan of Poltava.

What does it mean to say "we are all in prelest"? 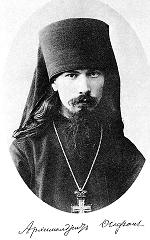 You write, "When I was reading the writings of Bishop Ignatius Brianchaninov, the following questions came to mind: On page 230 it is written that we are all in prelest; why then, when someone speaks of 'a man in prelest', is this attributed a special meaning? and how should one treat such a person?

In order to understand the expression "we are all in prelest," it is necessary to consider the following. The ancient ascetics regarded "repentance or lamentation of one's sins" as their primary ascetic labor. Many of their sayings concerning this have come down to us. I will cite a few of these in confirmation of [Bishop Ignatius'] writings.

"A brother said to Abba Sisoes: I perceive that the remembrance of God (mental prayer) ever abides in me. The elder said: It is not so extraordinary that your mind is constantly turned toward God; what is extraordinary is when a person considers himself the worst of all creatures" (Ignatius Brianchaninov, Patericon, 4).

"When Abba Arsenius the Great passed away, and St. Poemen heard of his repose, he shed abundant tears and said: Blessed are you, Abba Arsenius, because you wept over yourself during this life! One cannot help but weep, either here according to his own will, or against his will in the torments of hell" (Patericon, 29).

The more advanced a man is in holiness, the deeper is his awareness of his own sinfulness. Conversely, the less refined a man is, the weaker is his awareness of his own sinfulness. In the majority of people Such an awareness is altogether absent. This is why they do not understand the ascetic labor of repentance and do not feel any need for it. Because they do not understand this labor and feel no need to repent, one may say that all such people are in prelest. And inasmuch as we have but a limited awareness of our sinfulness, one may say that we are all in prelest !

..St. Isaac the Syrian wrote about this kind of prelest: "The effect of the cross is twofold; the duality of its nature divides it into two parts, One consists in endurin~ sorrows of the flesh which are brought about by the action of the excitable part of the soul, and this part is called activity. The other part lies in the finer workings of the mind and in divine meditation, as well as in attending to prayer, etc.; it is accomplished by means of the desiring part of the soul and is called contemplation. The part of the soul by dint of its zeal, while the second part is the activity of soulful love, in other words, natural desire, which enlightens the rational part of the soul. Every man who, before perfectly mastering the first part, switches to the second, attracted out of weakness--to say nothing of laziness, is overtaken by God's wrath because he did not first mortify his members which are upon the earth (Col. 3:5). In other words, he did not cure his thoughts of infirmities by patiently bearing the cross, but rather dared in his mind to envision the glory of the cross" (Word 55).

It is evident from these words of Isaac the Syrian that what we call prelest proper exists when a man starts trying to live above his capabilities. Without having cleansed himself of passions, he strives for a life of contemplation and dreams of the delights of spiritual grace. Thus the wrath of God befalls a man; because he thinks too highly of himself, God's grace is withdrawn from him and he falls under the influence of the evil one who actively begins to tickle his vainglory with lofty contemplation and [spiritual] delights...

Briefly, the difference between "general prelest" and prelest in the particular sense of the word can, on the basis of the above, be expressed thus. General prelest is forgetting and not noticing one's sinfulness. That which we call prelest proper is attributing to oneself righteousness when it does not actually exist. If a man thinks he is righteous, then his righteousness is not divine, but diabolical, foreign to the grace of God and to humility. One should recall the famous saying of Abba Poemen the Great: "I prefer a man who sins and repents to one who does not sin and does not repent. The first has good thoughts, for he admits that he is sinful. But the second has false, soul-destroying thoughts, for he imagines himself to be righteous" (Bp. Ignatius, Patericon, 75).

(Archbishop Theophan's letters translated from the Russian by Antonina Janda)