From the life of the venerable Ambrose of Optina (compiled by Archimandrite Agapit Belovidov). 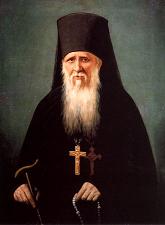 “For five years,” said the late elder himself, “I had the intention to go to Kiev to visit my homeland on the way in order to tonsure my old mother to the Lesser Schema secretly, but I didn’t have a chance to go.”

Let us add to this that the elder Ambrose during his entire residence in the monastery because of pain did not go anywhere far from it. He was only once in Belyov (40 miles from Optina) and it was for obedience, as assigned by the elder Makarius.

“My mother”, the late elder continued his story, “was always weak, sick. I remember that in summer she sat on the stove, but she lived longer than the father, despite the fact that he had good health. Father died at 60, and mother at 75. She lived a godly life and went by her own way to salvation. But if I had tonsured her, then she could have become confused and would not have got anywhere (neither with the laymen, nor with the nuns). And I thank God that I was not able to do this. ”