Saint Maximos Kavsokalyvites on the Signs of Illusion and Grace 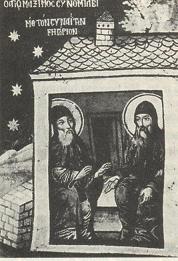 A native of Lampsacus on the Hellespont, Saint Maximos became a monk at the age of seventeen. When his spiritual father died, he went on pilgrimage to Constantinople, where he took up the ascesis of folly for Christ, pretending madness in order to conceal his virtues and struggles from the world. He then went to the Great Lavra of St Athanasius on Mount Athos, where he lived as a simple monk in complete obedience.

One day, he was told in a dream to go to the summit of Athos to receive (like Moses) the tablets of the spiritual law. He prayed continuously atop the Holy Mountain for three days, after which the Mother of God appeared to him surrounded by angels. She gave him a miraculous loaf for his sustenance and told him to live in solitude on the wild slopes of Mount Athos. Henceforth he lived apart, barefoot in all weather.

He would build himself crude shelters of branches and brush; after living in one for a short time he would burn it and move to a new place. Thus he received the name Kavsokalyvites "the Hut Burner" from the other monks, who dismissed him as a madman.

Saint Gregory the Sinaite, one of the great Hesychasts, heard of St Maximos, and hurried to meet him. When they met, St Maximos put aside his usual silence at St Gregory's pleading, and they discoursed together for many hours. St Gregory asked St Maximos the story of his life, and Maximos told him of the wonders God had accomplished in him since his youth. He said that one day, when still very young, he was praying with tears before the icon of the Mother of God, and as he bent to venerate it a gentle dew-like warmth suddenly filled his chest and heart, producing abundant compunction; and that since then his nous, stationed unshakeably in his heart, had not ceased to invoke the Name of Jesus and that of the Mother of God with unutterable sweetness.

They went on with the following conversation concerning Noetic Prayer:

"In saying the Prayer, are you sometimes rapt in ecstasy?" Gregory asked.

Maximos answered: "I made haste to the desert and have sought solitude for this very thing - in order to find the fruits of prayer in abundance - I mean the pure love of God and the ravishment of the nous by the Lord."

"What does the nous do when that happens? Does it continue to utter the prayer in the heart?"

"By no means", replied Maximos. "When the Holy Spirit visits the man of prayer, prayer ceases; for the nous, absorbed completely in the Spirit of God, ceases to act from its own energy. It lets itself be led 'where the Spirit wills' (Jn. 3:8), into the immaterial heaven of the divine light, or into other contemplations, or even into an inexpressible conversation with God. For just as wax, which is by nature hard, burns and becomes all fire and all light when brought into contact with fire, although remaining a material quite distinct from it, in the same way, the nous, in so far as it remains in its separate nature, conceives only what is connected to its nature and under its power; but when the divine fire, the Holy Spirit, draws near, it burns with the fire of the Godhead, carried away by the power of the Spirit; every thought and every concept vanishes, and the whole nous, swallowed up by the light of God, becomes divine and radiant light."

"The signs of diabolical illusion are disturbance of spirit, hardness of heart, fear, agitation of the thoughts, vanity, anger, vain imaginations and terrifying visions of light and fire. But when the Holy Spirit draws near to our spirit, He integrates it, makes it wise, humble and restrained. He instills in man the thought of death and of the Judgement, and leads him to weep tears of compunction at the thought of the Savior's loving kindness. He raises the nous to contemplation of things on high, and illumines it by bathing it in divine light. He gives peace to the heart, and conveys unutterable joy and exultation to all its powers. As the Apostle teaches, 'The fruits of the Spirit are joy, peace, patience, gentleness, self-control, compassion and humility'" (Gal. 5:22).

Saint Gregory was astonished at the wonders that God had accomplished in St Maximos, at his depth of spiritual understanding and his eloquence. Returning to the nearby monks, he said "He is an angel and not a man!" He begged St Maximos to give up his nomadic life and his pretended madness, and to live among his fellow monks for their edification. This St Maximos did. He settled in one of his crude huts, living on bread miraculously provided from heaven and on sea-water, which was made sweet by his prayer. He received and counseled any monks who sought him out, and over the years was visited by two Emperors and by the Patriarch of Constantinople. In his last years he returned to a small cell in his Lavra, where he reposed in peace at the age of ninety-five in the year 1365. The monks of Mount Athos immediately venerated him as a Saint.