Saint Gregory of Sinai on Delusion 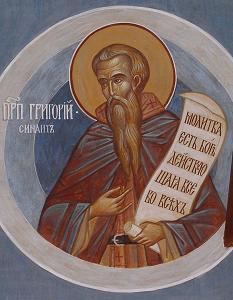 7. I wish you to be fully informed about delusion, so that you can guard yourself against it and not do great harm to yourself through ignorance, and lose your soul. For our free will easily veers towards keeping company with the demons, especially when we are inexperienced and still under their sway. Around beginners and those who rely on their own counsel the demons spread the nets of destructive thoughts and images, and open pits into which such people fall; for their city is still in the hands of the workers of iniquity, and in their impetuosity they are easily slain by them. It is not surprising that they are deceived, or lose their wits, or have been and still are deluded, or heed what is contrary to truth, or from inexperience and ignorance say things that should not be said. Often some witless person will speak about truth and will hold forth at length without being aware of what he is saying or in a position to give a correct account of things. In this way he troubles many who hear him and by his inept behavior he brings abuse and ridicule on the heads of hesychasts. It is not in the least strange that beginners should be deceived even after making great efforts, for this has happened to many who have sought God, both now and in the past.

Mindfulness of God, or noetic prayer, is superior to all other activities. Indeed, being love for God, it is the chief virtue. But a person who is brazen and shameless in his approach to God, and who is over-zealous in his efforts to converse with Him in purity and to possess Him inwardly, is easily destroyed by the demons if they are given license to attack him; for in rashly and presumptuously striving prematurely to attain what is beyond his present capacity, he becomes a victim of his own arrogance. The Lord in His compassion often prevents us from succumbing to temptation when He sees us aspiring over-confidently to attain what is still beyond our powers, for in this way He gives each of us the opportunity of discovering his own presumption and so of repenting of his own accord before making himself the butt of demons as well as of other people's ridicule or pity. Especially is this the case when we try to accomplish this task with patience and contrition; for we stand in need of much sorrow and lamentation, of solitude, deprivation of all things, hardship and humility, and - most important of all for its marvelous effects - of guidance and obedience; for otherwise we might unknowingly reap thorns instead of wheat, gall instead of sweetness, ruin instead of salvation. Only the strong and the perfect can continuously fight alone with the demons, wielding against them the sword of the Spirit, which is the teaching of God (cf. Eph. 6:17). The weak and beginners escape death by taking refuge in flight, reverently and with fear withdrawing from the battle rather than risking their life prematurely.

For your part, if you are rightly cultivating stillness and aspiring to be with God, and you see something either sensory or noetic, within or without, be it even an image of Christ or of an angel or of some saint, or you imagine you see a light in your intellect and give it a specific form, you should never entertain it. For the intellect itself naturally possesses an imaginative power and in those who do not keep a strict watch over it it can easily produce, to its own hurt, whatever forms and images it wants to. In this way the recollection of things good or evil can suddenly imprint images on the intellect's perceptive faculty and so induce it to entertain fantasies, thus making whoever this happens to a daydreamer rather than a hesychast.

Be careful, therefore, not to entertain and readily give assent to anything even if it be good, before questioning those with spiritual experience and investigating it thoroughly, so as not to come to any harm. Always be suspicious of it and keep your intellect free from colors, forms and images. For it has often happened that things sent by God to test our free will, to see which way it inclines and to act as a spur to our efforts, have in fact had bad consequences.

For when we see something, whether with mind or senses - even if this thing be from God - and then readily entertain it without consulting those experienced in such matters, we are easily deceived, or will be in the future, because of our gullibility. A novice should pay close attention solely to the activity of his heart, because this is not led astray. Everything else he must reject until the passions are quietened. For God does not censure those who out of fear of being deluded pay strict attention to themselves, even though this means that they refuse to entertain what He sends them until they have questioned others and made careful enquiry. Indeed, He is more likely to praise their prudence, even though in some cases He is grieved.

Yet you should not question everyone. You should go only to one, to someone who has been entrusted with the guidance of others as well, who is radiant alike in his life and in his words, and who although poor makes many rich (cf. 2 Cor. 6:10). For people lacking spiritual experience have often done harm to foolish questioners, and for this they will be judged after death. Not everyone is qualified to guide others: only those can do so who have been granted divine discrimination - what St Paul calls the 'discrimination of spirits' (1 Cor. 12:10) - enabling them to distinguish between bad and good with the sword of God's teaching (cf. Eph. 6:17). Everyone possesses his own private knowledge and discrimination, whether inborn, pragmatic or scientific, but not all possess spiritual knowledge and discrimination. That is why Sirach said, 'Be at peace with many, but let your counselors be one in a thousand' (Eccles. 6:6). It is hard to find a guide who in all he does, says or thinks is free from delusion. You can tell that a person is undeluded when his actions and judgment are founded on the testimony of divine Scripture, and when he is humble in whatever he has to give his mind to. No little effort is needed to attain a clear understanding of the truth and to be cleansed from whatever is contrary to grace, for the devil - especially in the case of beginners - is liable to present his delusions in the forms of truth, thus giving his deceit a spiritual guise.

If, then, you are striving in stillness to attain a state of pure prayer, you must journey with great trepidation and inward grief, questioning those with spiritual experience, accepting their guidance, always lamenting your sins, and full of distress and fear lest you should be chastised or should fall away from God and be divorced from Him in this life or the next. For when the devil sees someone leading a penitent life, he retreats, frightened of the humility that such inward grief engenders. But if, with a longing that is satanic rather than authentic, you are presumptuous enough to imagine that you have attained a lofty state, the devil will easily trap you in his nets and make you his slave. Thus the surest guard against falling from the joy of prayer into a state of conceit is to persevere in prayer and inward grief, for by embracing a solace-filled grief you keep yourself safe from harm. Authentic prayer - the warmth that accompanies the Jesus Prayer, for it is Jesus who enkindles fire on the earth of our hearts (cf. Luke 12:49) - consumes the passions like thorns and fills the soul with delight and joyfulness. Such prayer comes neither from right or left, nor from above, but wells up in the heart like a spring of water from the life-quickening Spirit. It is this prayer alone that you should aspire to realize and possess in your heart, always keeping your intellect free from images, concepts and thoughts. And do not be afraid, for He who says, "Take heart; it is I; be not afraid' (Matt. 14:27), is with us - He whom we seek and who protects us always. When we invoke God we must be neither timid nor hesitant. If some have gone astray and lost their mental balance, this is because they have in arrogance followed their own counsels. For when you seek God in obedience and humility, and with the guidance of a spiritual master, you will never come to any harm, by the grace of Christ who desires all to be saved (cf. 1 Tim. 2:4). Should temptation arise, its purpose is to test you and to spur you on; and God, who has permitted this testing, will speedily come to your help in whatever way He sees fit. As the holy fathers assure us, a person who lives an upright and blameless life, avoiding arrogance and spurning popularity, will come to no harm even if a whole host of demons provoke him with countless temptations. But if you are presumptuous and follow your own counsel you will readily fall victim to delusion. That is why a hesychast must always keep to the royal road. For excess in anything easily leads to conceit, and conceit induces self-delusion. Keep the intellect at rest by gently pressing your lips together when you pray, but do not impede your nasal breathing, as the ignorant do, in case you harm yourself by building up inward pressure.

There are three virtues connected with stillness which we must guard scrupulously, examining ourselves every hour to make sure that we possess them, in case through unmindfulness we are robbed of them and wander far away from them. These virtues are self-control, silence and self-reproach, which is the same thing as humility. They are all-embracing and support one another; and from them prayer is born and through them it burgeons. Grace begins to operate in people during prayer in different ways, for, as the apostle says, the Spirit distributes Himself as He wills in a variety of modes, and is perceived and known correspondingly (cf. Heb. 2:4). Elijah the Tishbite serves here as an example for us (cf. 1 Kgs. 19:11-12). In some the Spirit appears as a whirlwind of awe, dissolving the mountains of the passions and shattering the rocks of our hardened hearts, so that our worldly self is transpierced and mortified. In others the Spirit appears as an earthquake, that is to say as a sense of inward jubilation or what the fathers more clearly define as a sense of exultation. In others He is manifested inwardly as a fire that is non-material yet real; for what is unreal and imaginary is also non-existent. Finally, in others - particularly in those well advanced in prayer - God produces a gentle and serene flow of light. This is when Christ comes to dwell in the heart, as St Paul says (cf. Eph. 3:17), mystically disclosing Himself through the Holy Spirit. That is why God said to Elijah on Mount Horeb that the Lord was not in this or in that –  not in the particular actions He manifests Himself in to beginners - but in the gentle flow of light; for it is in this that He attests the perfection of our prayer.