A Monk Made 3000 Prostrations a Day 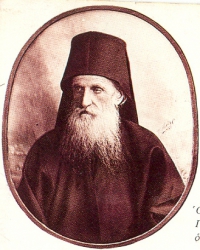 The Deluded "Super-Ascetic" Who Made 3,000 Prostrations A Day.

When Elder Daniel Katounakiotis (+1929) was in the Russian Monastery, he observed that a certain monk living in asceticism in a kathisma outside the Monastery played a role of a great ascetic. He fasted severely, wore the most wretched clothes, walked around barefoot even in winter, etc. Among other things, while the rule called for 300 prostrations a day, he made 3000. For this reason the other monks marvelled at him.

Elder Daniel, even though he was younger at the time, displayed no enthusiasm. His clear-sighted eyes discerned a situation that was not pleasing to God. He noticed that the door of his kathisma contained an opening which allowed the passers-by to look in and praise his great asceticism.

His love moved him to report the situation to the abbot, and thus save the brother from delusion. The abbot set out for the kathisma of the "super-ascetic".

"How are you doing here, father?"

"By your prayers, Elder, well. I struggle and weep over my sins."

"Only you never come to tell me your thoughts."

"What could I tell you, Elder? You know them all. I am a sinner who struggles."

"How do you struggle? Tell me, do you make prostrations?"

With that the abbot left. The incision had been made, and the abscess soon revealed its foul contents. For the former "great ascetic" made a 180-degree turn. He was unable to make even fifty prostrations. Instead of ragged clothes he now wore whatever was most expensive, and had the choicest foods brought to his poor table. Naturally, the other fathers were astonished, and they understood that his excessive ascetic practices had been fed by the spirit of pride. This explained this surprising change, for the spirit of delusion runs after extremes. According to patristic wisdom, the extreme, the superfluous, and the excessive are "of the demons".