On the Greatest Humility of the Mother of God

Archimandrite Cleopa (Ilie). On Humility of the Mother of God. 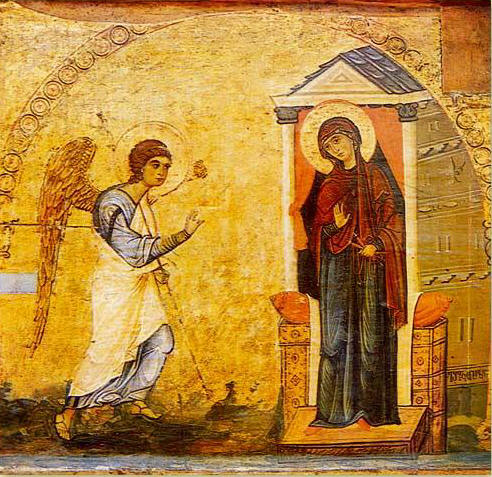 Truly, there is no other creature of God, on earth as well as in Heaven, who would reach such glory and such gifts, as the Most Pure and Blessed Mother of God. At the beginning, God told of Her to our forbearers Adam and Eve and revealed them that salvation would be made and the head of the serpent would be bruised through Her (see Gen. 3: 15). The Holy Spirit, by the mouth of the great prophet Isaiah, pointed at Her, that She would be the Virgin that would give birth to Immanuel (see Isaiah 7: 14); the Holy Spirit pointed at Her, that She would sit as the beautiful Queen decorated with rich gifts upon the right hand of God (see Ps. 45: 10). Elisabeth, the mother of John, the glorious Prophet, Forerunner and Baptist of our Lord, knelt to Her and blessed Her, calling Her the Mother of the Lord (see Lk. 1: 43). She is the Mother and the Most Pure Virgin, and all generations shall call Her blessed (see Lk. 1: 48), She has found favour with God (see Lk. 1: 30). It was foretold about Her that She would remain Virgin even after giving birth (see Isaiah 7: 14).

She has merited the greatest glory among all the creatures of God, being called Theotokos by the Orthodox Church, because He who had been born from Her was truly God and Man. She is blessed by the whole Church and called more honorable than the Cherubim, and more glorious beyond compare than the Seraphim. This greatest glory was achieved by the Most Pure and Blessed Virgin Mary, because through Her God fulfilled the mystery of salvation of the mankind, which was hidden from the ages and unknown even to the Angels, and through Her the closest union of God with people was achieved. It was not union by grace or union by will, but the single and most perfect union, i. e. union by the Hypostasis of the Logos with the hypostasis of human nature.

Thus, you see, my brother, what gifts and what honour has been received from God by the Most Pure and Blessed Virgin Mary. And now the question arises: what was the cause for such glory and such honour? Was it Her most pure virginity? Was it Her noble royal lineage of David, from which She came? Was it sanctity of Her life, because She always was in prayer, fasting and contemplation of the Holy Scripture? Was it Her angelic life, which She led in the Holy of Holies for twelve years? Was She chosen by God from all generations only for these virtues? No! Truly no!

All these virtues of the Most Pure Virgin were good and worthy of praises from God and men. But you should know and be absolutely sure that the precious and invaluable stone of humility was the greatest and holiest virtue that the Most Pure Virgin had in Her heart. Because Her humility was the greatest of Her virtues, and it was the cause of Her election and vocation. We can understand it from the prophecy of the Most Pure Virgin, who said by the Holy Spirit: He hath regarded the low estate of his Handmaiden: for from henceforth all generations shall call me blessed; He that is mighty hath done to me great things; and holy is His name (cf.: Lk. 1: 48–49).

We see this greatest humility of the Most Pure and Blessed Virgin Mary, when She before Archangel Gabriel called Herself the Handmaid, though She understood from the glad tidings received by Her that She had found favour with God, that She was blessed among women and highly favoured by the Lord and that the Infant who should be born of Her should be called the Son of God (see Lk. 1: 28, 35). In spite of all these blessings and praises of the Archangel, She did not become proud in Her heart, but told to the Angel with humility: Behold the handmaid of the Lord; be it unto me according to thy word (Lk. 1: 38).

Thus, brother, I’d like to remind you once again, so that you understand it and know for sure that humility was the highest virtue gracing the life of the Most Pure and Blessed Virgin Mary. For the sake of Her greatest humility, Most Gracious God regarded Her and chose Her to become the Mother of His coessential and co-glorified Son. Truly, where the profound depth of humility was found, there the all-glorious grace was abundant. Because the deeper was humility in the heart of the Most Pure and Blessed Virgin, the more glorified was the grace of God in Her to fulfill the words: God will rise in the deep heart (cf.: Ps. 64: 7–8).

Thus, brother John, I have cited several witnesses above in response to your question, so that you know that all the saints and the righteous men of God, as well as the Queen of all the saints, the Most Pure and Blessed Mother of God, among other their virtues, put on the highest and greatest humility, as an invaluable crown, and with it obtained God’s grace and mercy in this and the future life.