Alexis the Man of God

Life of Venerable Alexis the Man of God. 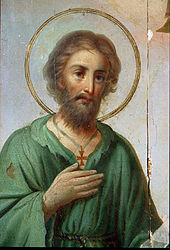 St Alexis was born at Rome into the family of the pious and poverty-loving Euphemianus and Aglais. The couple was childless for a long time and constantly prayed the Lord to grant them a child. And the Lord consoled the couple with the birth of their son Alexis.

At six years of age the child began to read and successfully studied the mundane sciences, but it was with particular diligence that he read Holy Scripture. When he was a young man, he began to imitate his parents: he fasted strictly, distributed alms and beneath his fine clothing he secretly wore a hair shirt. Early on there burned within him the desire to leave the world and serve God. His parents, however, had arranged for Alexis to marry a beautiful and virtuous bride.

On his wedding night, Alexis gave her his ring and his belt (which were very valuable) and said, "Keep these things, Beloved, and may the Lord be with us until His grace provides us with something better." Secretly leaving his home, he boarded a ship sailing for Mesopotamia.

Arriving in the city of Edessa, where the Icon of the Lord "Not-made-by-Hands" (August 16) was preserved, Alexis sold everything that he had, distributed the money to the poor and began to live near the church of the Most Holy Theotokos under a portico. The saint used a portion of the alms he received to buy bread and water, and he distributed the rest to the aged and infirm. Each Sunday he received the Holy Mysteries.

The parents sought the missing Alexis everywhere, but without success. The servants sent by Euphemianus also arrived in Edessa, but they did not recognize the beggar sitting at the portico as their master. His body was withered by fasting, his comeliness vanished, his stature diminished. The saint recognized them and gave thanks to the Lord that he received alms from his own servants.

The inconsolable mother of St Alexis confined herself in her room, incessantly praying for her son. His wife also grieved with her in-laws.

St Alexis dwelt in Edessa for seventeen years. Once, the Mother of God spoke to the sacristan of the church where the saint lived: "Lead into My church that Man of God, worthy of the Kingdom of Heaven. His prayer rises up to God like fragrant incense, and the Holy Spirit rests upon him." The sacristan began to search for such a man, but was not able to find him for a long time. Then he prayed to the Most Holy Theotokos, beseeching Her to clear up his confusion. Again a voice from the icon proclaimed that the Man of God was the beggar who sat in the church portico.

The sacristan found St Alexis and brought him into the church. Many recognized him and began to praise him. The saint secretly boarded a ship bound for Cilicia, intending to visit the church of St Paul in Tarsus. But God ordained otherwise. A storm took the ship far to the West and it reached the coast of Italy. The saint journeyed to Rome and decided to live in his own house. Unrecognized, he humbly asked his father's permission to settle in some corner of his courtyard. Euphemianus settled Alexis in a specially constructed cell and gave orders to feed him from his table.

Living at his parental home, the saint continued to fast and he spent day and night at prayer. He humbly endured insults and jeering from the servants of his father. The cell of Alexis was opposite his wife's windows, and the ascetic suffered grievously when he heard her weeping. Only his immeasurable love for God helped the saint endure this torment. St Alexis dwelt at the house of his parents for seventeen years and the Lord revealed to him the day of his death. Then the saint, taking paper and ink, wrote certain things that only his wife and parents would know. He also asked them to forgive him for the pain he had caused them.

On the day of St Alexis' death in 411, Archbishop Innocent (402-417) was serving Liturgy in the presence of the emperor Honorius (395-423). During the services a Voice was heard from the altar: "Come unto Me, all ye who labor and are heavy laden, and I will give you rest" (Mt.11:28). All those present fell to the ground in terror.

The Voice continued: "On Friday morning the Man of God comes forth from the body; have him pray for the city, that you may remain untroubled." They began to search throughout Rome, but they did not find the saint. Thursday evening the Pope was serving Vigil in the Church of St Peter. He asked the Lord to show them where to find the Man of God.

After Liturgy the Voice was heard again in the temple: "Seek the Man of God in the house of Euphemianus." All hastened there, but the saint was already dead. His face shone like the face of an angel, and his hand clasped the paper, and they were unable to take it. They placed the saint's body on a cot, covered with costly coverings. The Pope and the Emperor bent their knees and turned to the saint, as to one yet alive, asking him to open his hand. And the saint heard their prayer. When the letter was read, the righteous one's wife and parents tearfully venerated his holy relics.

The venerable relics of St Alexis, the Man of God, were buried in the church of St Boniface. The relics were uncovered in the year 1216.

The Life of St Alexis, the Man of God, was always very popular in Russia.

You budded from a famous and glorious root;
You blossomed from a royal and illustrious city, O supremely wise Alexis;
You disdained everything on earth as corruptible and fleeting,
And you hastened to Christ the Master.
Always entreat Him to save our souls.

Today with hymns and praise
We celebrate the feast of Alexis the blessed and we cry aloud:
Rejoice, gladsome adornment of the righteous.