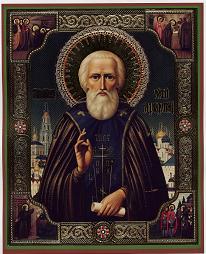 Saint Sergius of Radonezh was born in the village of Varnitsa, near Rostov, on May 3, 1314. His parents were the pious and illustrious nobles Cyril and Maria (September 28). The Lord chose him while still in his mother's womb. In the Life of St Sergius it is reported that even before the birth of her son, St Maria and those praying heard the thrice-repeated cry of the infant at the Divine Liturgy: before the reading of the Holy Gospel, during the Cherubic hymn, and when the priest pronounced: "Holy Things are for the Holy."

God gave Cyril and Maria a son whom they named Bartholomew. From his very first days of life the infant amazed everyone by his fasting. On Wednesdays and Fridays he would not accept milk from his mother, and on other days, if Maria used oil in the food, the infant also refused the milk of his mother. Noticing this, Maria refrained altogether from food with oil.

At the age of seven, Bartholomew was sent to study together with his two brothers: his older brother Stephen, and his younger brother Peter. His brothers learned successfully, but Bartholomew fell behind in his studies, even though the teacher gave him much special attention. The parents scolded the child, the teacher chastised him, and his classmates made fun of his lack of comprehension. Finally, Bartholomew besought the Lord with tears to grant him the ability to read.

Once, his father sent Bartholomew out after the horses in the field. Along the way he met an angel sent by God under the appearance of a monk. The Elder stood at prayer beneath an oak in a field. Bartholomew approached him, and bowing, waited for the Elder to finish praying. The monk blessed him, gave him a kiss and asked what he wanted.

Bartholomew answered, "With all my soul I want to learn reading and writing. Holy Father, pray for me to God, that He may help me to become literate." The monk fulfilled Bartholomew's request, offering up his prayer to God. In blessing the child he said to him: "Henceforth, my child, God gives you to understand reading and writing, and in this you will surpass your brothers and peers" (See the famous M. Nesterov painting "Vision of Bartholomew").

Then the Elder took a vessel and gave Bartholomew a piece of prosphora."Take, child, and eat," said he."This is given to you as a sign of the grace of God, and for the understanding of Holy Scripture." The Elder wanted to leave, but Bartholomew asked him to visit at the home of his parents. His parents received their guest with joy and offered him their hospitality.

The Elder replied that it was proper to partake of spiritual nourishment first, and he bade their son to read the Psalter. Bartholomew began to read, and his parents were amazed at the change that had occured with their son. In parting, the Elder prophetically said of St Sergius, "Your son shall be great before God and the people. He shall become a chosen habitation of the Holy Spirit."

After this the holy child read without difficulty and understood the contents of books. He became immersed in prayer with a special fervor, not missing a single church service. Already in childhood he imposed upon himself a strict fast. He ate nothing on Wednesdays and Fridays, and on the other days he sustained himself on bread and water.

About the year 1328, the parents of St Sergius moved from Rostov to Radonezh. When their older sons married, Cyril and Maria received the monastic schema shortly before their death at the Khot'kov monastery of the Protection of the Most Holy Theotokos, not far from Radonezh.

Later on, the older brother Stephen was widowed and became a monk at this monastery. Having buried his parents, Bartholomew and his brother Stephen withdrew into the forest (12 versts from Radonezh) to live in the wilderness. At first they made cells, and then a small church, and with the blessing of Metropolitan Theognostus, it was consecrated in the name of the Most Holy Trinity. But soon, unable to bear the difficulties of life in the wilderness, Stephen left his brother and went on to the Moscow Theophany monastery, where he became close to St Alexis, afterwards Metropolitan of Moscow. (February 12).

On October 7,1337 Bartholomew was tonsured by Igumen Metrophanes, taking the name of the holy Martyr Sergius (October 7), and he started to build a new habitation to the glory of the Life-Creating Trinity. Suffering temptations and demonic apparitions, St Sergius advanced from strength to strength. Gradually he became known to other monks seeking his guidance. St Sergius accepted all with love, and soon a brotherhood of twelve monks were gathered in the small monastery.

Their experienced spiritual guide distinguished himself by an extraordinary love for work. With his own hands he built several cells, he carried water, he chopped wood, baked bread, sewed clothing, prepared food for the brethren and humbly took on other tasks. St Sergius combined the heavy work with prayer, vigil and fasting.

The brethren were amazed that with such severe exertion the health of their guide did not deteriorate, but rather became all the more hearty. It was not without difficulty that they implored St Sergius to accept the position of igumen of the monastery.

In 1354 Bishop Athanasius of Volyn ordained the saint a hieromonk and elevated him to the rank of igumen. Just as before, monastic obediences were strictly fulfilled at the monastery. With the expansion of the monastery, its needs also grew. Often the monks had only scant food, but through the prayers of St Sergius unknown people provided the necessities.

Reports of the exploits of St Sergius became known even at Constantinople, and Patriarch Philotheus sent to the monk a cross, a "paraman" (monastic clothing, a four-cornered cloth tied with cords to the chest and worn beneath other garb, and adorned with symbols of the Lord's Passion) and schema-robe in blessing for new deeds, and a grammota of blessing, in which the Patriarch counselled the chosen of God to organize a cenobitic monastery. The monk set off with the patriarchal missive to St Alexis, and received from him the counsel to introduce a strict manner of cenobitic life. The monks began to grumble at the strictness of the monastic Rule, and St Sergius was compelled to forsake the monastery. At the River Kirzhach he founded a monastery in honor of the Annunciation of the Most Holy Theotokos. Matters at the former monastery went quickly into disarray, and the remaining monks recoursed to St Alexis that he should get the saint to return.

St Sergius unquestioningly obeyed the holy hierarch, and left in place of himself at the Kirzhachsk monastery his disciple, St Roman.

Already during his lifetime St Sergius had been vouchsafed the gift of wonderworking. He raised a lad, at a point when the despairing father had given up on his only son as lost. Reports about the miracles worked by St Sergius began quickly to spread about, and the sick began to come to him, both from the surrounding villages and also from remote places. And no one left from St without receiving healing of infirmities and edifying counsel. Everyone gave glory for St Sergius, and reverenced him on an equal with the ancient holy Fathers. But human glory did not hold allure for the great ascetic, and as before he remained the example of monastic humility.

One time St Stephen, Bishop of Perm (April 27), who deeply revered St Sergius, was on journey from his diocese to Moscow. The roadway passed eight versts distant from the Sergiev monastery. Intending to visit the monastery on his return trip, the saint stopped, and having recited a prayer, he bowed to St Sergius with the words: "Peace be to thee, spiritual brother." At this instant St Sergius was sitting in the trapeza for a meal with the brethren. In reply to the blessing of the holy hierarch, St Sergius rose up, recited a prayer, and made a return blessing to St Stephen. Certain of the disciples, astonished at the extraordinary action of St Sergius, hastened off to the indicated place, and became convinced of the veracity of the vision.

Gradually the monks began to witness also other similar actions. Once, during Liturgy, an angel of the Lord served with the saint, but St Sergius in his humility forbade anyone to tell about this until after his death.

St Sergius was connected with St Alexis by close bonds of spiritual friendship and brotherly love. St Alexis in his declining years summoned St Sergius to him and besought him to accept to be Russian Metropolitan, but St Sergius humbly declined to be primate.

The Russian Land at this time suffered under the Mongol-Tatar Yoke. Having gathered an army, Great-prince Demetrius Ioannovich of the Don went to monastery of St Sergius to ask blessing in the pending struggle. St Sergius gave blessing to two monks of his monastery to render help to the great-prince: the Schemamonk Andrei [Oslyaba] and the Schemamonk Alexander [Peresvet], and he predicted the victory for prince Demetrius. The prophecy of St Sergius was fulfilled: on September 8, 1380, on the feastday of the Nativity of the Most Holy Theotokos, Russian soldiers gained a total victory over the Tatar hordes at Kulikovo Pole (Kulikovo Field), and set in place the beginning of the liberation of the Russian Land from the Mongol Yoke. During the fighting St Sergius and the brethren stood at prayer and besought God to grant victory to the Russian forces.

For his angelic manner of life St Sergius was granted an heavenly vision by God. One time by night Abba Sergius was reading the rule of prayer beneath an icon of the Most Holy Theotokos. Having completed the reading of the canon to the Mother of God, he sat down to rest, but suddenly he said to his disciple, St Mikhei (May 6), that there awaited them a wondrous visitation. After a moment the Mother of God appeared accompanied by the holy Apostles Peter and John the Theologian. Due to the extraordinary bright light St Sergius fell down, but the Most Holy Theotokos touched Her hands to him, and in blessing him promised always to be Protectress of his holy monastery.

Having reached old age, and foreseeing his own end six months beforehand, St Sergius summoned the brethren to him and designated his disciple St Nikon (November 17), who was experienced in the spiritual life and obedience, to be igumen. In tranquil solitude St Sergius fell asleep in the Lord on September 25, 1392. On the night before, the great saint of God summoned the brethren a final time to give them his final instruction: "Brethren, be attentive to yourselves. Have first the fear of God, purity of soul and unhypocritical love...."

A zealot of good deeds
and a true warrior of Christ warrior of Christ our God,
you struggled greatly against the passions in this passing life;
in songs and vigils and fasting you were an image and example to your disciples,
thus the most Holy Spirit lived within you,
and you were made beautiful by His working.
Since you have great boldness before the Holy Trinity,
remember the flock which you have wisely gathered,
and do not forget to visit your children as you promised, venerable Sergius our father!

Bound by the love of Christ, O venerable one, and following Him with unwavering desire,
you despised all carnal pleasures and you shone like the sun in your land.
Therefore, Christ has enriched you with the gift of miracles.
Remember us who venerate your most holy memory,
and who call out to you: "Rejoice, Sergius, made wise by God!"