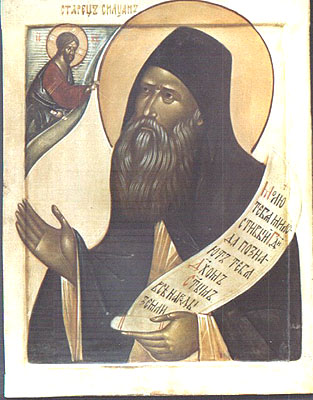 I myself was twice deluded. Once the enemy showed me light and the thought tempted me: Accept what you see, it proceeds from grace. Another rime I accepted a vision and suffered greatly on that account. Once, at the end of Matins when the choir were singing 'Let every thing that hath breath praise the Lord,' I heard King David in heaven singing the praises of God. I was standing in the choir and it seemed to me that there was neither roof nor dome, and that I was looking at the open sky. I spoke of this to four men of God but not one of them told me that the enemy had made mock of me, while myself I thought that devils could not be singing the praises of God, therefore my vision could not be from the enemy. But I was beguiled by vanity and began to see devils again. Then I knew that I had been deceived, and I made full disclosure to my confessor and asked him for his prayers; and because of his prayers I am now saved and ever beseech the Lord to grant me the spirit of humility. And were I to be asked what would I have of God - what gifts I should answer: 'The spirit of humility in which the Lord rejoices above all things." Because of her humility the Virgin Mary became the Mother of God, and is glorified in heaven and on earth above all others. She committed herself wholly to God's will. 'Behold the handmaid of the Lord,' she said. And we must all try to do likewise.