Living of Saint Niphon the Wonderworker

Living of Saint Niphon the Wonderworker 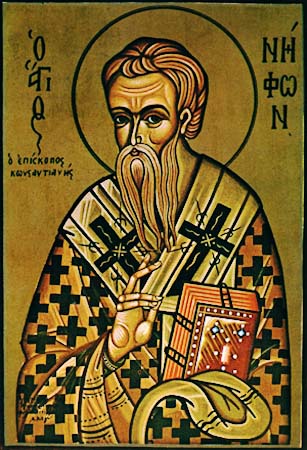 St. Niphon of the Cyprus

Niphon was born in Paphlagonia and brought up in Constantinople at the court of a commander [Sabbatius]. Falling into evil company, the young Niphon became dissolute and gave himself over to many sins and vices. Because of his sin, he could not even pray to God. By the mercy of the Most-holy Theotokos, he was brought back to the path of righteousness and was tonsured a monk. He had numerous visions of the heavenly world, and for four years he endured a difficult struggle with a demon, who constantly whispered to him: ``There is no God! There is no God!'' But, when the Lord Jesus Himself appeared to him alive on an icon, Niphon received great power over evil spirits and was freed from these grievous temptations. He was such a great seer that he saw angels and demons around men just as clearly as he saw men themselves, and he knew the thoughts of men. He often spoke with angels and disputed with demons. He built a church to the Most-holy Theotokos in Constantinople, gathered monks together, and saved many souls. Alexander, the Archbishop of Alexandria, according to a revelation from heaven, consecrated him bishop of the town of Constantia on Cyprus. At that time St. Niphon was already old. He governed well the Church of God for a short time and took up his habitation in Christ's Eternal Kingdom. Before his death he was visited by St. Athanasius the Great, then the archdeacon of the Church in Alexandria, and after his death he was seen by Athanasius, his face shining as the sun.